Although the ceramic ultrasonic and thermal sensors of Arenal PCS can be applied in any liquid in the world, it is mainly designed for abrasive slurries and pastes, which can be found in Mineral and Metal processing plants, dredging and tunneling. Arenal is actively involved in industrial slurries, like in CMP, pigment and catalysts slurries and battery pastes and potato starch slurries.

The optimal slurry for measuring density, flow and massflow is a homogene turbulent slurry in a pipe or vessel, with a large concentration of particles below 1 mm.

Arenal PCS produces Slurry Density Analysers for the mining, dredging, drilling industry and for building materials. The Analyser consists of the process control Analyser and the wafer with its sensors. The wafer is connected between two flanges in such way that the ceramic sensors are flush mounted in the mass stream. Arenal is the first and only supplier in the world of ultrasonic density Analysers and slurry transmitters with ceramic sensors: they do not wear, respond fast, are highly reproducible, inline and can withstand high pressures and temperatures.

Some points of use in the industry

Ultrasonic spectroscopy is the better and safer alternative for nuclear densitometers. High energy pulses are induced into the piezo element: an ultrasonic wave arises and propagates through the ceramic elements: the reflections from the the interface between the element and the slurry are measured. Their properties change due to the temperature and the properties of the slurry, of which density is one of. All acoustic properties are read by the process control Analyser (PCA). In the PCA the density, SG, and temperature are calculated. Learn more about the technology here.

One or more ceramic probes can be mounted in wafer cells, made from high molecular weight polyethylene-1000. The size of the wafer is depending on the pipe and flange size. 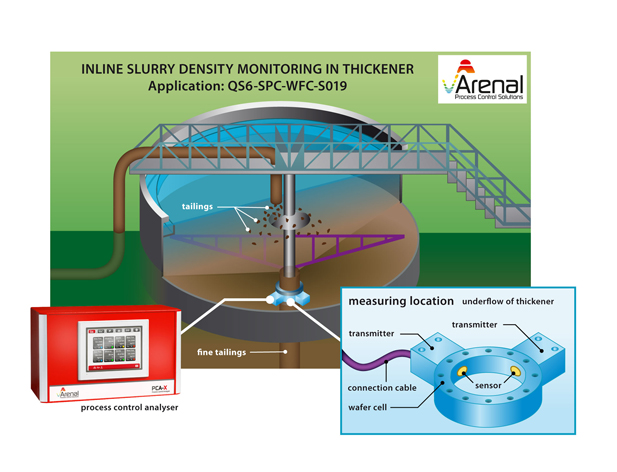